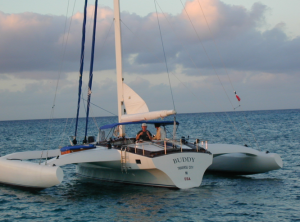 It seems like every time you turn around, there is something that expands our imagination and your repertories of words. When exploring some of these tongue twisting words, Trimaran comes to mind.

A Trimaran is a boat with three hulls; two smaller hulls or out-riggers and a larger hull. These are attached to each other with cross beams. These crafts are mainly sail-driven but there are some that are commissioned as ferries and warships. 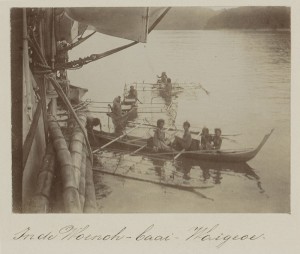 Four thousand years ago, the Polynesian indigenous folks built the first Trimaran. However in modern times, US technical giants have harnessed some of the basic engineering feats from the early crafts and improved them to produce a more cost effective, energy saving and aesthetically pleasing craft.

In 1945 Victor Tchetchet, was credited with the re-emergence of this wily vessel and creation of the word Trimaran. He built two of these Trimarans out of marine ply, each being 24ft long. There were several others that either improved on his design or mucked it up all together! The latter set of designers were able to develop a new breed of Trimarans, making them safer and more sea-worthy but it was only in the 1960 and 1970s that this type of craft gained popularity. 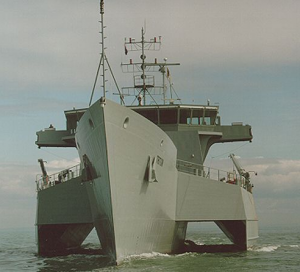 As previously mentioned the Trimaran has also been used as a passenger ferry and even a war craft. A glaring example of such a feat was in 2005 when the 127 metre Trimaran commissioned by Spanish ferry owner Fred Olsen. This craft had the capacity to carry 1280 persons and approximately 340 vehicles, sailing at a top speed of 40 knots per hour. Similarly, in 2000 a Trimaran warship was by QineitQ, a British defence contractor.

It is very clear that a Trimaran has multiple purposes and the design usually determines what the craft is going to be used for. However, because of the diversity, the range of usage has grown exponentially since the early days of Trimarans that were built for necessity. It is not hard to see why this type of craft was conceptualised in the beginning. We always say necessity is the mother of invention, but with the Trimaran, it has gone above and beyond necessity.

This video demonstrates how the Trimarans are modern, spacious and comfortable crafts. It can mimic a home away from home and carries all the modern amenities for extreme comfort.

This video clip on the other hand opens to the fact that the Trimaran can be also used as a competition-sailing pleasure craft. The one featured in the video is said to be the largest Trimaran in existence to date.

One would be happy at the prospect of being able to acquire such an elegant craft to sail or just spend a couple nights on in the ocean away from the hustle and bustle of city life, or just have a social gathering with good friends, great food, rocking music and copious amounts of rum!